Blank Check with Griffin and David (@blankcheckpod on Twitter) is a film podcast where #TheTwoFriends, Griffin Newman and David Sims, examine the filmographies of famous directors and determine the moment when they got a "Blank Check". This is a wiki for information on the hosts, producers, Benducers, inside jokes, director discussions and featured guests. 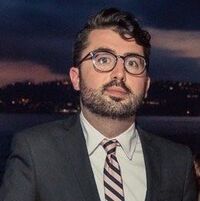 Richard Lawson (@rilaws on Twitter) is a film critic, and currently writes for Vanity Fair. He is also the co-host of the awards podcast Little Gold Men, with fellow film critics and awards obsessives Katey Rich, Mike Hogan, and Joanna Robinson.

This wiki was developed as an initiative of the Blankies community on Reddit.

If you would like to help, a great place to start is with one of these article stubs!